US Design Applications based on Hague Agreement: 80% Failure Rate

On May 13th, 2015, the USPTO began accepting Design Patent Applications filed by foreign applicants under the Hague Agreement. WIPO promises four advantages of using the Hague System for the International Registration of Industrial Designs:

Based on our review of USPTO data, we believe the system does not live up to those promises. Our data rather suggests, that that foreign applicants attempting to secure design patents in the United States through a Hague filing may face a significant disadvantage. 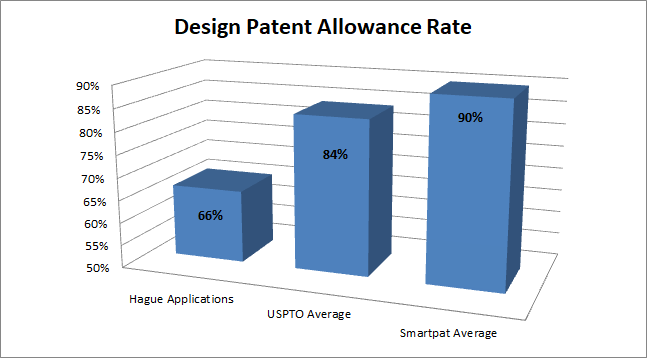 Of those 549 applications that were allowed, only 156 were allowed in the first office action. The remaining 393 applications required a response to an office action, which usually requires the engagement of a registered US patent practitioner. We therefore believe, that less than 20% of Hague filings (156 of 831 applications) may have provided the applicant the desired benefits as suggested by WIPO. More than 80% of Hague filings likely didn’t. The majority of applicant’s either abandoned their US application altogether, or had to engage a US firm to help salvage the application.

Typical situations that require a response

The reasons, Hague applications required a response to the USPTO will look familiar to those who prosecute design patent applications on a regular basis.

At Smartpat, design applications account for about 40% of our patent filings. Over the years we have grown used to, and even come to appreciate, the high expectations of the patent examiners we interact with. In many cases, we advise clients that drawings used in their overseas applications are insufficient for the US and that new drawings are required. Our primarily European clients and colleagues are not always happy with us, especially if we find areas of concern in the fifth revision of their self-prepared drawings and suggest additional changes. But those who follow our advice are rewarded with an allowance rate above 90% – compared with a USPTO average of 84%.

If you are planning to file a Hague application to ultimately issue as a US design patent – think twice. In many cases, filing a national US design patent application with drawings that have been prepared specifically with the USPTO in mind will be beneficial and save the client headaches and cost in the long run. Alternatively, we offer clients to review their Hague filings for consistency with USPTO rules.