Being accused of patent infringement is an expensive place to be. The accused infringer has options, but all of them are costly. One option is to initiate an Inter Partes Review (IPR) to invalidate the accuser’s patent, which can cost $100k just to initiate the proceedings. A complete IPR proceeding through PTAB hearing can cost more than $300k. Defending a patent infringement suit is even more expensive: Even with less than $1m at risk the cost of defending a patent suit averages about $500k.

Therefore, preventing a competitor (or other potential accuser) from obtaining a patent can be a good business decision. Since September 16, 2012, 35 U.S.C. 122(e) provides a mechanism for third parties to submit patents, published patent applications, or other printed publications of potential relevance to the examination of a patent application with a concise description of the asserted relevance of each document submitted (1). The cost of submitting a Third Party Submission is typically low. We have filed Third Party Submissions for less than $1000 in cases where clients already knew the prior art that applied. 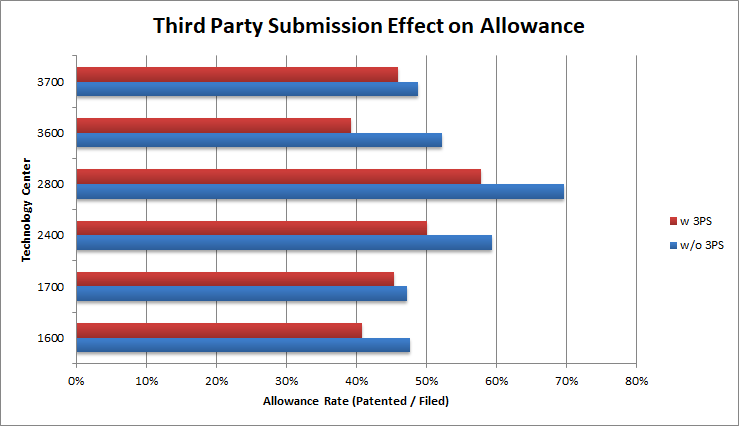 Unfortunately, searching the web did not provide any good answers. Most of the publications around Third Party Submissions deal with the law and the mechanics around them, but not with their efficacy. So we did our own research. In particular, we looked at every patent application that was filed in 2013. We chose 2013 so that the applications would be published when the rules regarding these submissions had already been in effect for some time. On the other hand we wanted to look at application where a significant portion of the applications had already been finally disposed, i.e. where either a patent had issued or the application had been abandoned. So 2013 it was.

The data shows that Third Party Submissions reduce the allowance rate of patent applications, in particular in Technology Centers 3600, 2800 and 2400. Third Party Submission seem less effective in preventing competitor’s patents in TC1700 which handles chemical cases and  in TC3700 which deals with mechanical engineering, manufacturing, and products.

Next, we wanted to see if in those cases where a patent issued the Third Party Submission may have helped reduce the scope of the claim. To do that, we counted how many final rejections were issued in the allowed patents. While not being precise, we suggest that the number of final rejections in an application is correlated with a loss of claim scope.