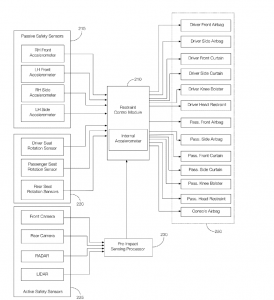 In a fully autonomous vehicle there is really no need for the driver and passenger seats to be facing forward. But rearward facing seats pose new challenges when the car is involved in an accident. Ford’s patent application US 2017/0210322 is addressing this new challenge. Ford writes: “One way to allow the driver to relax and interact with other occupants while the vehicle operates autonomously is to allow some or all of the seats in the vehicle cabin to rotate. For instance, the first row seats may rotate to allow the driver and front row passenger to face one another. Alternatively, the first row seats may rotate to face the back row seats. Rotating the seats, however, can create issues with the vehicle’s passive safety systems. For example, rotating the seats may move an occupant away from one airbag but toward another. Therefore, the airbags and other passive safety systems may be controlled according to the orientation of the seats.”

Certainly a valid concept to sense to orientation of vehicles in an autonomous vehicle and adjust the airbag firing decisions during a crash based on the seat configuration.