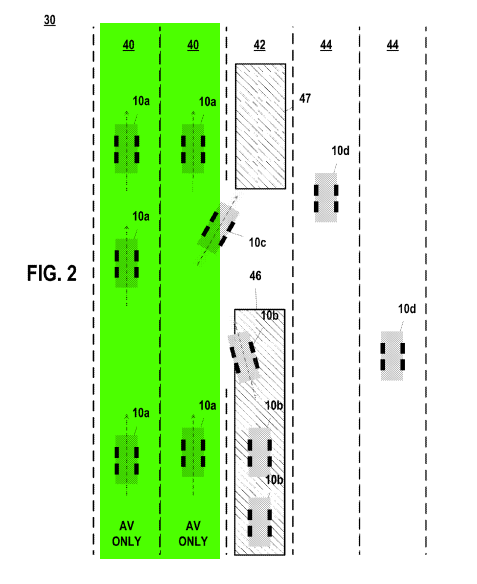 Getting humans and automated vehicles to play nicely together in the same lanes is a tricky task. Ford’s patent application US20170197626 recognizes the difficulty and suggests dedicated “AV-only lanes” – and a system how these dedicated lanes can be managed by a server.  Also, finally there appears to be a legitimate use for DSRC V2X communication. Ford suggests to use it to communicate between the autonomous vehicle and the server that controls the AV only lane. 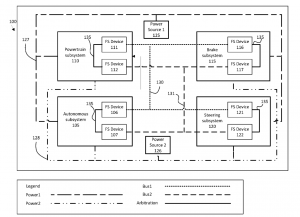 In patent application US20170199834 Ford disloses an electrical architecture for an autonomous vehicle that appears realistic:

Not quite sure though what Ford is trying to achieve with their claim of having signals on both busses that let the receiver know which bus/signal is authoritative. Seems the receiver will need logic to figure out whom to follow without being told.

In yet another patent application (US 20170197615) Ford is suggesting to use plenoptic cameras for automated parking applications.  Per Ford’s specification “Plenoptic cameras have a series of focal points that allow the view point within an image to be shifted. Plenoptic cameras are capable of generating a depth map of the field of view of the camera and capturing images. A depth map provides depth estimates for pixels in an image from a reference viewpoint. The depth map is utilized to represent a spatial representation indicating the distance of objects from the camera and the distances between objects within the field of view.”

Luminar Technologies of Portola Valley, CA, has filed a patent application for their pulsed laser for a Lidar system. They disclose a central laser having optical links into sensor heads. Anyone who has worked with optical MOST busses will recognize the challenge such an architecture faces.

Other interesting aspects: Use of light between 1400 nm and 2050 nm wavelength and a fiber-optic amplifier. Definitely not the type of Lidar sensor that has been used in the automotive industry for many years. Seems to be in interesting company, but playing in a crowded field of Lidar startups. 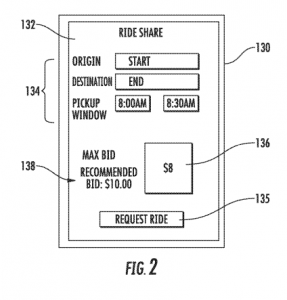 In not so technical terms: Expect to pay more depending in your “reputation”. So be nice to your fellow riders. Or it will cost you.  Wouldn’t that be a great feature for airlines? Adjust future ticket prices based on their behavior. Perfect to make compliant passengers, without having to physically beat them.