This week we looked through a few autonomous vehicle patent applications: 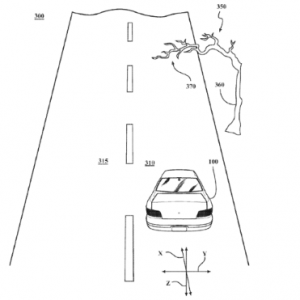 In US20170185089 Toyota claims a method of detecting overhanging objects in an external environment of an autonomous vehicle. It appears, the Toyota engineers are primarily concerned with trees, and whether the autonomous vehicle can drive below overhanging branches. The overhanging object are detected with a Lidar Scanner, and their speed is determined with a radar sensor. Which is curious, since trees don’t usually move. Seems like a lot of object detection boilerplate applied “floating objects”, but without any detail that suggests Toyota has really solved an important problem. 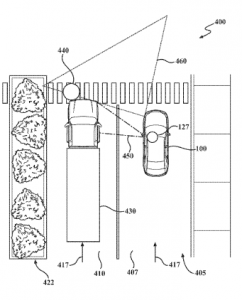 I am not quite getting the point though:  If the car is autonomous, why does it matter what the driver sees? The key to an autonomous vehicle is that one must assume the driver is not looking outside the vehicle at all. And if the car is not autonomous: How is this different than say a cross traffic alert system with brake activation?

The idea seems logical: Hold off automatically steering around an object until there is only one path left – which presumably means the steering system can now act on behalf of the driver since there is only one choice left. In practice, the claimed method seems overly simplistic though: It doesn’t mention avoiding a collision by braking. But more importantly, if there are two paths around an obstacle (Opel only talks about a single obstacle), one path may lead into oncoming traffic and the other path does not: Clearly, an evasive steering system should not wait until only the path into oncoming traffic is left and chose it, but decide for the safer path before only the unsafe path is left. Based on their drawings Opel does not appear to consider truly alternative paths though. Rather they are comparing two trajectories on the same side around an obstacle and propose to delay steering around the obstacle until only an aggressive evasive maneuver is left.

Hyundai / Kia are working on a road boundary detection system using an optical scanner. Their drawings show the scanner mounted in the front bumper – probably the worst place to package an expensive component. It is also an indication that the application is based on research, and not production related.

Texas Instruments patent publication 20170186169 shows that their team in India is working on Structure from Motion (SfM) algorithms.

US patent application 20170187994 is assigned to Intel and claims a compute system for scene reconstruction. Interestingly, Intel in this case chose to not follow 37 CFR 1.77  and omitted a brief summary of the invention. The invention is concerned with anonymizing image data that is collected in vehicles and uploaded to the cloud.

Magna Electronics is staying with its practice of keeping continuation chains alive as shown in US patent application publication 20170182944 relating to a vehicular camera system.

ClearMotion, an MIT spinoff, must have spent a lot of money on their patent application:  In application 20170182859 claims  1-1619 have been cancelled and claims 1620-1634 are pending. The company is pursuing its active suspension system. Wonder why people in the Boston area are so keen on active suspension (Prof. Bose was also working on it) when we have the best potholes in Detroit.

This post was prepared by looking through patent applications matching the following search: PD/06/29/2017 and (spec/”emergency braking” or spec/”lane keeping” or spec/”autonomous vehicle”).